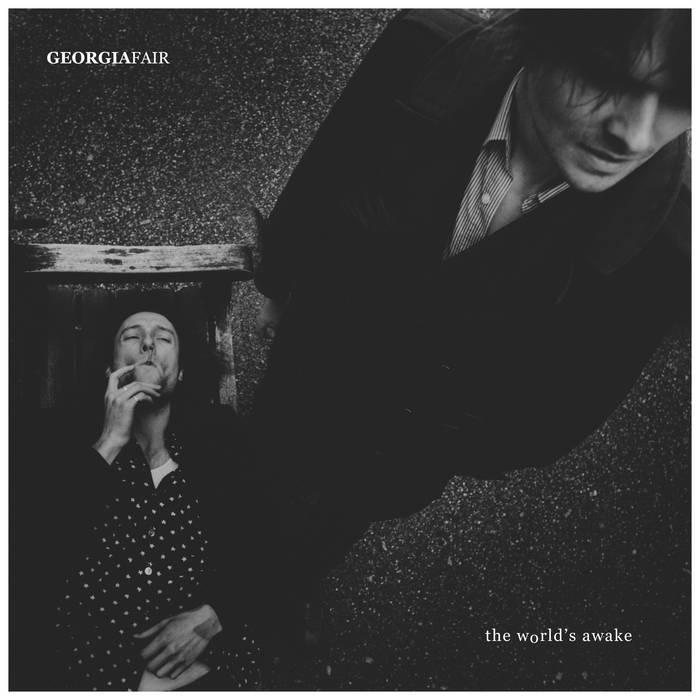 20% of all sales going to WIRES bushfire relief.

'the world's awake' is Georgia Fair's third album, written in Melbourne, realised in London and sealed on the south coast of New South Wales in a converted tractor shed.


The light was soft blue, you would be forgiven for thinking it was somewhere in England as the rain started to drizzle. Though it wasn't England, it was somewhere in Sydney's North in the back yard of the Benjamin's family home. They were kicking or throwing a ball of some description, trying to prevent Monday morning coming sooner, because it meant they had to be back at school. Jordan would make the venture to the Riley home most weekends to play music with Benjamin and his brother.

Skip forward March 18, 2010. Georgia Fair's first time in Texas, green as the edamame beans that they didn't order. Complimentary from the fancy Japanese place that they charged to the new company card they had acquired. Ate them whole, skin and all, spat them out just the same. Fresh from recording what would be the first of two albums in the US. The first "All Through Winter" near the Blue Ridge Mountains, North Carolina with mentor & guru Bill Reynolds (Band of Horses). The second "Trapped Flame" in Los Angeles with pork pie Ted Hutt & musicians from the bands of the likes of PJ Harvey.

The outfits changed but the nucleus stayed the same. Great songs. Authenticity, travel & adventure. Incidentally they did find themselves in England. First in the town where Benjamin was born. Second in London where Jordan lost his shit a bit. Sharing a shoe box of a studio with a fake fire place that they transcended to keep the Georgia Fair flame burning.

Like so many of their musical heroes they traversed the Indian Ocean looking for new landscape and inspiration, what surmounted was some of their best writing to date. 'The World's Awake' is the latest glimpse offered by the effervescent Georgia Fair.

Call me a liar
Call me thief
Call me anything
Cause I am on fire
Track Name: boredom and laughter
Off and away
Off to a day he invented up on his inventing machine
He set up his sail
And ripped it back down
Just to see if his life had a meaning

Breathe…
In the Ocean
Come on breathe, in the night.
Track Name: mystery trip
Where do I find myself at such an hour
At my bruised feet falls the petal of a flower
Only a scent so sweet
Can heal my wound so deep
Under a creeping heat I feel myself cower
She’s too delicate to touch
I fear she might break
Lady Pocahontas, wait’s by the lake
Without a hair out of place
I reach to untie her lace
But lady Pocahontas shies away again
I am ashamed

It’s not our fault that we are both lying
And fighting
Inside
This tiny little room
We both avert our eyes
But there’s no where to go, oh
Lady Pocahontas did we get it right?
Or do I gotta sleep alone again tonight?
Track Name: bloodline
Give me another

Bandcamp Daily  your guide to the world of Bandcamp

Featuring Oakland sounds from the Smart Bomb collective and Samplelov.